At least five crashes have occurred in the City of Littleton since 2019 after police pursuits by Douglas County deputies who were following suspects, some of whom were believed to be in stolen vehicles, records requests and prior reporting show.

The wrecks highlight stark differences between chase policies for the Littleton Police Department and the Douglas County Sheriff's Office, with Douglas County granting officers more reasons to engage in a pursuit.

The most recent case was July 29, when an allegedly stolen car pursued by Douglas County deputies ran a red light and caused a crash at the intersection of Santa Fe Drive and Bowles Avenue around 11:43 p.m.

Other incidents include a crash in early December 2021 when Douglas County deputies pursued an allegedly stolen truck from unincorporated Douglas County before driving into the back of the vehicle and causing it to crash on Santa Fe Drive in Littleton.

The driver, who ran onto the road and was hit by an officer driving to the scene, suffered injuries and was taken to a hospital.

A pursuit in early February 2019 preceded a fatal crash involving a driver of a stolen car who was fleeing Douglas County deputies. That speeding driver hit another vehicle at the intersection of Santa Fe Drive and Mineral Avenue in a crash that left two people dead.

The crash came as Douglas County deputies chased a different car in the incident, also believed to have been stolen, along Highway 85 — which is known as Santa Fe Drive farther north. The 20-year-old driver in the crash, Deanna Bixby, was driving "several miles ahead" of the deputies pursuing the other car, according to Douglas County Sheriff Tony Spurlock. Jayne Davicsin, 25, and Ryan Carter, 27, were killed in the crash.

Spurlock defended his office's chase policy during a  news conference on Feb. 7, 2019 — a day after the fatal crash — saying the incident "could have been avoided if the individuals had not done those crimes."

Stacey Hervey, associate professor of criminal justice and criminology at Metropolitan State University of Denver, said chase policies — while at times necessary — can increase risks to people and places.

“I think departments have to have a very clear-cut chase policy, because adrenaline is high," said Hervey, who also worked for the Boulder Police Department as a victim advocate for two years. “We know if they do no chase in a community, people are just going to run from the cops, so you have to balance it out."

A comparison of Littleton's and Douglas County's chase policies shows key differences for when officers can and should engage in a pursuit.

Littleton's policy calls for officers to rarely engage in chases unless an officer "has a reasonable belief that the suspect, if allowed to flee, would present a danger to human life or cause serious injury."

"Unless a greater hazard would result, a pursuit should not be undertaken if the subject(s) can be identified with enough certainty that they can be apprehended at a later time," the department's policy reads.

Douglas County's pursuit policy is wider-reaching, allowing for pursuits of potentially non-violent offenders. In addition to clearing officers to chase vehicles whose "subject or subjects pose a substantial threat of death or serious bodily injury to another person," the policy also allows for chases of dangerous drivers — such as those who may be under the influence of a substance — as well as for cars believed to be stolen.

Douglas County deputies can also chase if the alleged suspect is believed to have committed a felony, according to the policy.

The most recent chase by Littleton police occurred in May when a suspect of a stolen car struck a Littleton officer before driving away. The chase led to one officer losing control of his vehicle and crashing into a concrete wall on West Main Street.

According to department spokesperson Sheera Poleman, the only reason Littleton police pursued in that instance was because of the unknown status of the officer who was struck. Once the officer who was hit by the suspect was determined to be in a stable condition, officers called off the chase.

“Property is not as important as a human life, and we try to be cognizant of that," Poleman said, adding that chases rarely occur from Littleton police because of the “safety of our officers and the civilians around us."

Littleton Police Chief Doug Stephens said the difference in policies "goes back to an overall philosophical view of pursuits and if it is worth the risk since it will likely end in a crash.”

For Stephens, anything short of a "violent felony" is "not worth the risk to the general public."

Spurlock justified the pursuit of allegedly stolen vehicles allowed under his office's policy, citing a rise in car thefts. Such crimes have been a top priority for the county, with data showing thefts up 20% between 2021 and 2020.

“Our deputies need to have as many tools as are available to them and auto thefts are incredibly increasing crimes," Spurlock said. “If we did not choose to pursue anyone with a stolen car … every car would be subject to be stolen at any time with no retribution whatsoever."

Spurlock said his officers weigh the risks associated with a chase "every day" and said most chases are usually called off. Factors that can make a chase riskier can be the time of day and traffic. 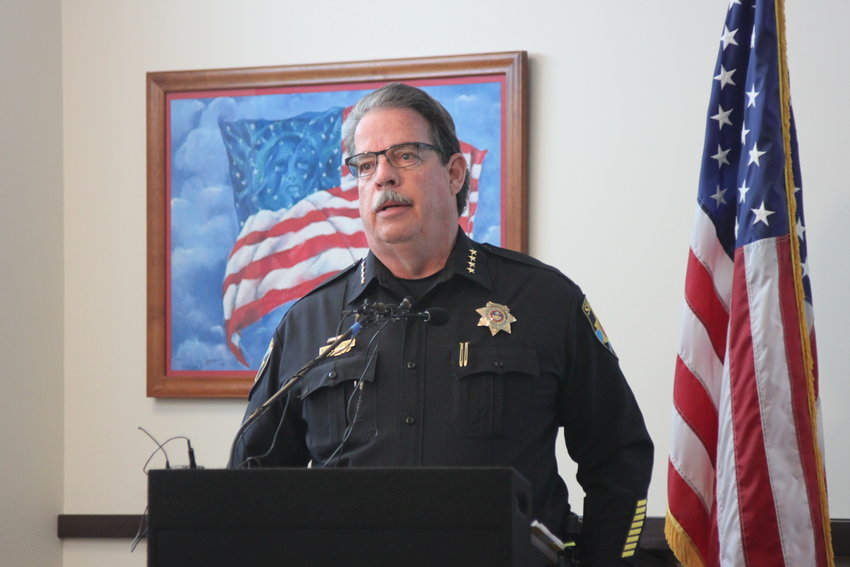 Need to notify other agencies

In instances of chases that reach into other cities and counties, Poleman, the Littleton police spokesperson, said police try to respect the policies of other agencies.

“All of the metro departments and sheriff’s offices have an understanding that if it is coming out of the county or place that it’s originating in, then it is that county’s responsibility," Poleman said. "Most of the departments are very respectful and let each other know what’s happening."

According to both Littleton and Douglas County policies, officers are supposed to notify police in the jurisdiction they believe a chase will cross into, though the language of the two policies slightly differs.

Littleton's policy calls for this to happen "immediately" while Douglas County's says it should happen "as soon as possible."

In the case of the chase in 2019 that preceded the fatal crash, Littleton police were never notified as the chase approached city borders.

"It's typically customary if we're engaged in a chase and we're leaving our jurisdiction, we'll notify the jurisdiction we're entering," Littleton police Cmdr. Trent Cooper told Colorado Community Media in 2019. "It's hard to judge. I'm sure Douglas County's dispatchers had a lot going on. I can tell you our chase policy is very strict, because pursuits are very dangerous. Very few things are worth this kind of risk."

Douglas County officers did notify Littleton police once the vehicle they were chasing entered the city but the chase ended at almost the same time because of the crash, Cocha Heyden, a spokesperson for the Douglas County Sheriff's Office, said at the time.

According to a records request, Douglas County deputies did notify Littleton police during the 2021 crash that left the driver injured.

But the Douglas County Sheriff's Office said it was "unable to confirm if this was before or after entering the city limits as a pursuit can change at any moment, but they are always advised at some point."

The Douglas County Sheriff's Office said it could not say whether officers notified Littleton police during the latest incident July 29, citing an active investigation.

Stephens said he's been satisfied with Douglas County's communication for chases that cross into Littleton, though he said chases from Douglas County officers have been more frequent in recent years due to the county's wider-reaching policy.

Spurlock said in some instances it can often be that deputies don't have time to alert jurisdictions before they cross.

“Often it happens on the county line … where we’re in their jurisdiction before we let them know," he said.

Spurlock said blame for accidents that can result in damages and injuries should be placed on the suspects, not officers involved in a chase.

"It is their responsibility and it is their fault that they’re committing a crime and don’t drive appropriately and cause a crash," Spurlock said.

For Hervey, the MSU professor, the threshold for when a chase should be initiated should be high.

“The person should be a risk, not just in a stolen vehicle,” she said.

Other items that may interest you

Acosta, Brighton police commander, dies
Former Brighton Police Department Cmdr. Frank Acosta passed away of natural causes, the city announced Sept. 23. Acosta joined the police department in February 2000. Before that, he was a state …
Classes continue at Fort Lupton HS despite circulated threats
The Weld Re-8 School District became the latest in a series of school districts to face rumored threats to school safety.   In a district website post Sept. 23, Weld Re-8 Superintendent …

Shared electric scooters continue spread in Denver suburbs, but safety a concern
In the beginning, the scooters arrived without permission. Now, the electric devices are continuing to spread to more metro-area cities, touted as a way to reduce traffic but also feared by some …

We have noticed you are using an ad blocking plugin in your browser.

The revenue we receive from our advertisers helps make this site possible. We request you whitelist our site.