As Centennial moves to the next stage of its housing study, some residents expressed concerns about development, affordability and the value of community input during the District 1 community meeting with council members Candace Moon and Robyn Carnes on June 28.

Ward’s presentation about Centennial’s current housing study garnered the most community response and questions of the evening, as residents voiced concerns about housing development and affordability in Centennial and questioned how much community feedback would be valued.

At the end of last year, Centennial applied for the planning grant and was awarded the maximum amount of $200,000 by the Colorado Department of Local Affairs. The planning grant aims to help local governments understand the housing needs of the community and adopt policy and regulatory strategies to qualify for the housing development incentives grant program, Ward said.

The housing development incentives grant program requires that a local government adopt some of the 15 potential housing solutions the state identified, and the grant helps fund efforts such as the development of infrastructure that provides affordable housing, Ward said.

“The city currently doesn’t have any plans to apply for this incentives grant program. But we do want to keep the door open if we want to apply for it in the future,” Ward said. “That is really our hope with this project, is that we can consider how we might qualify for those grant opportunities in the future, if we’re interested.”

The first phase of Centennial’s housing study, which began in March, was a housing needs assessment that involved collecting data and community input on housing in Centennial, Ward said.

During a June 6 Centennial City Council study session, consultants with Root Policy Research said if current housing and economic trends continue, home ownership will decrease in Centennial and only those working in the mining, oil and gas industry will be able to afford the median price of a detached home in the city by 2035.

“What we found out so far is it’s very hard for people to move into Centennial because housing is expensive and there’s just not a lot of it,” Moon said. “People’s salaries have not kept up with the cost of buying a house.”

In addition to concerns about the rising cost of homes, Ward said some senior residents have also said they want to downsize but they cannot find a different, smaller housing unit to downsize. As a result of senior residents not moving out of their single family homes, there aren’t as many homes available for new families to move into, Carnes said.

“We are really a community of single family homes,” Moon said. “We simply don’t have a lot of apartments or condos scattered throughout the city.” 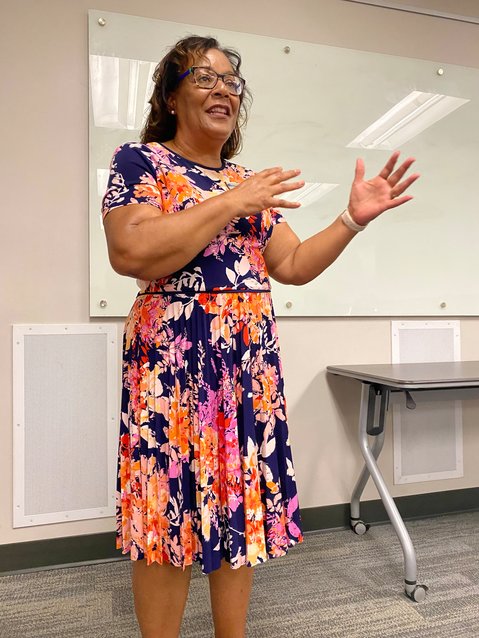 Candace Moon speaking during the District 1 community meeting on June 28, 2022, in SouthGlenn Library. 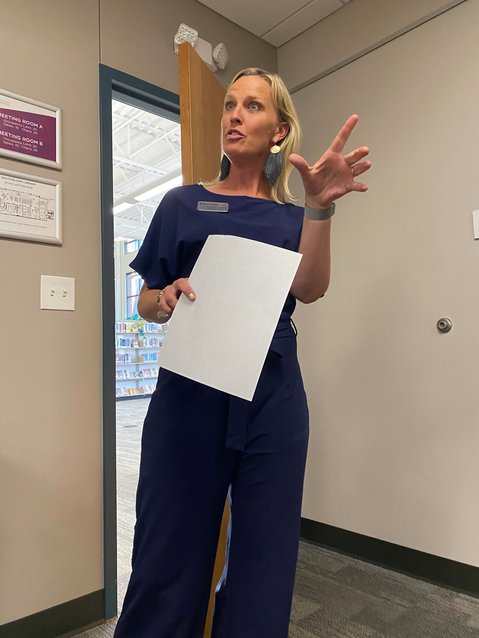 Robyn Carnes speaking during the District 1 community meeting on June 28, 2022, in SouthGlenn Library.
Previous Next

In response, Ward said a lot of these strategies are ones that would be adopted by city council, which is why the housing study group is trying to connect with residents throughout the community to get their input.

“What we’re hoping is that throughout this process, we can put as much of our information available on the website as possible,” Ward said. “Our goal is to have some potential strategies that would go to city council, kind of, first half of next year.”

Since city council will be the primary decision makers, Moon said they are taking its cues from residents and the feedback they give in the housing study.

“We’re also having a very limited number of people participate in the study,” Moon said. “We’re a town of 110,000 people and we’re not getting the feedback that we need. So we really need people to tell us, OK, what’s your ideas?”

However, a few attendees raised concerns about how much community input will be valued in the housing study process, given the passing of the SouthGlenn redevelopment despite pushback from many community members.

“I think SouthGlenn has left a very bitter taste with the word ‘housing,’” said one resident at the meeting, as others in the room voiced agreement. “A lot of people are still angry about that. And I think their point is, ‘Why should I give you my two cents' worth? I did when I said I didn’t want a bunch of apartments…nobody cared what I had to say then.’”

After some back and forth discussion about SouthGlenn and residents expressing disappointment that the redevelopment was approved, Moon tried to end the conversation about it.

“I can’t discuss SouthGlenn right now because we did what we did. We adopted the plan. The developer hasn’t done anything,” said Moon. “He hasn’t come to the city with a plan of, ‘This is what I want to do.’”

During the meeting, some residents expressed support for building more apartments in Centennial while others said they worried apartments would reduce Centennial’s appeal as a suburban area with a lower density of people.

Ward said a struggle for staff is the city will hear 110,000 different perspectives, and it is difficult to integrate all of those different viewpoints. There is no one solution that will solve everyone’s problem, she said.

“There’s not a good answer at this point,” Moon said. "It is something to be discussed."

Moon again encouraged people to share their ideas and comments with the housing study group.

In response, an attendee said, “We would like to be assured that we’re gonna be listened to this time.” 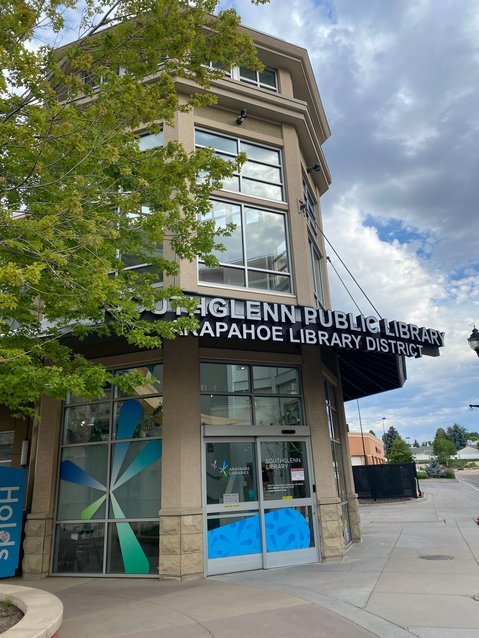 The SouthGlenn Library was the location of the District 1 community meeting held on June 28, 2022. 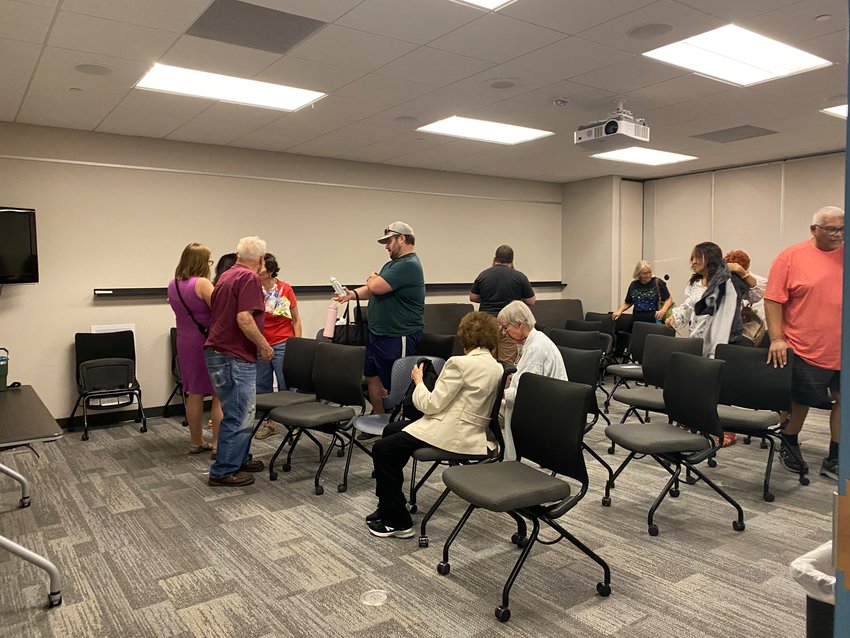 The District 1 community meeting was held in a room in the SouthGlenn Library on June 28, 2022. This image was taken after the meeting concluded.
Previous Next

The next phase of the housing study is collecting community input on nine of the 15 potential housing strategies the state identified as part of the House Bill 21-1271, Ward said.

Centennial City Council previously assessed the 15 potential strategies and identified seven of the bill’s proposed strategies and two innovative strategies that Centennial should explore further, according to a July 1 email from the city.

The first strategy the housing study is collecting community feedback on is accessory dwelling units. These units are defined in the email as “small secondary residential structures located behind the primary house or within an existing house.”

Residents can submit feedback about whether they would be in favor of accessory dwelling units in Centennial by filling out an online survey at: bit.ly/CentennialADU.

After collecting feedback on the nine strategies, the housing study group will narrow down the strategies to the top four that seem the most supported and likely to have a high impact in Centennial, Ward said.

“And then, potentially, those four strategies would go to either Planning and Zoning Commission and/or city council, kind of based on what they are,” Ward said.

In addition to filling out the online surveys, Ward said residents can also attend a housing needs workshop on Aug. 9 from 5 to 7 p.m. The location has not yet been decided.

There will also be an opportunity to submit feedback during the Centennial Under the Stars event on Aug. 13 from 5-10 p.m. at Centennial Center Park, located at 13050 E. Peakview Ave.

“Our goal is really to reach people in as many different ways as we possibly can,” Ward said. “We understand that this is, you know, a pressing challenge.”

Those interested in learning more about the housing study can find out information by visiting the project’s webpage at: CentennialCO.gov/housing. Residents can also submit questions by emailing housing@centennialco.gov or they can call the planning and zoning hotline at (303) 754-3308.

Other items that may interest you

New library responsibilities to be determined in agreement

Weed whacking Colorado’s ozone problems
Standing on a leaf-strewn lawn at Sloan’s Lake Park early on a sunny December day, Jordan Champalou says cutting ozone by switching to cleaner engines is as easy as pressing a button. And then he …

Old motels put dent in homelessness crisis
Denver’s five-year plan to reduce by half the number of people who are homeless and living outdoors relies on a relatively new strategy — buying up old motels and converting them into housing.  …

After month of free fares, many riders stayed with RTD
After Colorado offered $28 million to make public transit free for the month of August — in an effort to ease air pollution when ozone levels are highest — many riders stayed, even after fares …

Talent of all ages highlighted at Centennial Holiday Artisan Market
As she twirled, jumped and danced her heart out at Centennial Center Park, 11-year-old Onyx Toney was among local talent who brought holiday cheer to the city on Dec. 3.   It was her …

We have noticed you are using an ad blocking plugin in your browser.

The revenue we receive from our advertisers helps make this site possible. We request you whitelist our site.